I want to thank you for showing interest in my art. I feel the need to add some information on my present art which is strongly driven by the political and ethnic situation in Italy. My sensibility as an artist cannot remain inter in the front of all the problems that are causing the martyrdom of my beautiful country. Let me explain the allegory of “AN ITALIAN COMEDY”. The first character from the right to left is ex Judge of the Constitutional Court, Dr. Carnevale, who is playing poker with two men of the mafia. The old man, is worried and concerned about the signs made from the ex-monarch of the Italian government, Senator Giulio Andreotti (the second character). The other man of the mafia (younger) sure of himself but above all confident of the cards he has hidden behind his back (10 of diamonds—symbol of wealth, the ace of spades—symbol of threats and punches). The third character is the ex minister in a diverse government the honorable B. Craxi, friend and accomplice of Andreotti presently exiled in Tunisia. The fourth character is Monsignor Angelini, great friend and admirer of Senator Andreotti; the last to ingeniously believe in his innocence. The fifth character is the dog of BRACCO ITALIANO breed (the dog is almost always present in my painting); it symbolizes here the Magistrate Antonio Di Pietro, a hero in this end of the century in Italy.

Figures and Interpretation
One:   “Judge: Dr. CARNEVALE President of Constitution of Italy (1994) 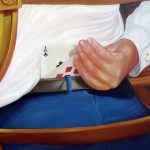 Exhibitions and Awards
1997: from May 21 to June 13, to the 46th Annual All Juried at the BOCA RATON MUSEUM 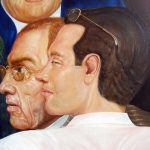 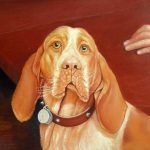 Paintings and sculpture are the first creations of all forms of expression. Through this form of art since Paleolithic times, man has been able to document and transmit his story: cultures, costumes, religion, etc. Great civilizations of the past: Egyptian, Syrian-Babylonian, Mycenae, Certain, Etruscan, Pompeian (even Pre-Columbian civilizations, Middle Eastern, Oriental: Sung, Kamakura, Ming, Edo, Ching…) have continued to exist in memories of man thanks to this form of expression. Painting and sculpture have definitively contributed to the Socio-Cultural growth, but also to the philosophical, religious and political growth of our civilization…

One can state that it is the duty of every Artist (if he is such) that he must offer a testimonial and chronicle of his lifetime experiences, though his art…